From atop an Italian hillside down to the Adriatic Sea grows a grape called Pecorino. Can you visualize rows of vineyards dancing in the sun among a backdrop of craggy mountains? A little daydreaming is sure to do us good right now. So, let’s talk about Pecorino wine.

First, let’s be clear. Yes, I’m talking about Pecorino wine, not Pecorino cheese. Not that there’s anything wrong with the robust Italian cheese! It’s flavorful, salty, and part of my adulthood rather than childhood. Thus, Pecorino cheese does share some similarities to the Pecorino grape variety. The wine, however, is a little less prevalent here in the United States.

Fortunately, the Slow Wine World Tour 2020 hosted a master class in Seattle last month in conjunction with Consortium for the Protection of Wines of Abruzzo. Pecorino was the featured wine, and one worth exploring in my opinion. For starters, it is a white variety indigenous to Abruzzo in Italy.

If you see Italy as a boot, as it’s often described, Abbruzo is about halfway down. The region is home to about 32,000 hectares of vines (I believe that computes to a little over 79,000 acres). Additionally, there are 10,000 grape producers and over 250 wineries. A new generation of Italian winemakers here are using traditional techniques and working with respect for the environment.

The History of Pecorino Wine

From the mountainous region of Abruzzo, shepherds would historically guide sheep through the vineyards to the region of Puglia to the south. Coincidentally, this occurred when the grapes were reaching ripeness. It is said that the sheep favored eating this kind of grape as it was sweeter than others. The lore of the grape’s name is that it derives from Pecorino cheese because this cheese was gifted to the vineyard owner by the farmer of the sheep. It was a way to compensate for all those consumed grapes!

The Pecorino variety is low yielding. It is likely that is why it was abandoned in the past, when the philosophy was more about higher yields rather than quality. After the grape was planted in a milder climate a more balanced grape resulted, and  it was revived. Today, the grape produces wines with food friendly acidity (think of it in the same way a squeeze of lemon brightens up a dish). Ageability and good structure are also part of the equation. 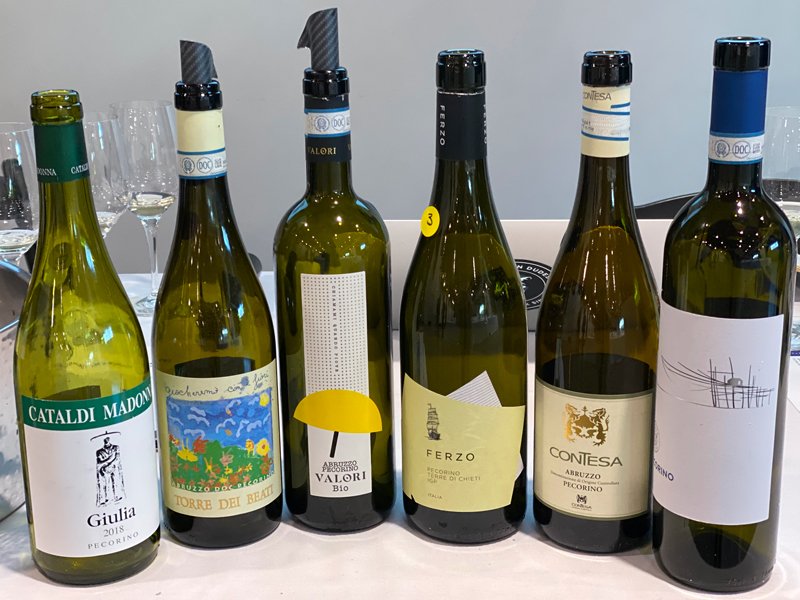 The master class featured six wines from the 2018 vintage. Most examples poured had been aged in stainless steel, leaving the mouthwatering wines fresh and bright. Additionally, concrete vessels were used in crafting some of the wines. This practice adds a lush mouthfeel, a trait that my notes mention for several of the wines.

The first wine poured originated from the small family estate of Tenuta I Fauri. A sense of savoriness intrigued me, along with pepper notes and a balsamic feel. This wine had me craving artichokes. The energetic Vini Valori selection gave me hints of anise. The charming Torre dei Beati offered up a riper fruit character and stronger flavor profile. The six samples poured offered everything from flavors of familiar Golden Delicious apple to tropical star fruit. Even some saltiness. “Zippy,” say my notes. All were delightful.

Pecorino wine seems more interesting than Pinot Grigio yet less puckery than Sauvignon Blanc. I am eager to explore more and enjoy this pleasant variety at the table. Meanwhile, visions of pasta primavera dance in my head! If you’re looking for a different variety to try and wish to support small scale Italian producers, why not give Pecorino a chance?

If you’re in the greater Seattle area or can have wine shipped to your home state, find Pecorino at VinoSocial client madwine.com.

Food Wine Click offers a recipe for Seared Scallops on a Spring Risotto to pair with Pecorino wine.

If you’re interested in Italian wine, you may want to celebrate National Moscato Day.