Did you sign up to take Washington Wine Report’s Syrah Challenge? It’s time to reveal bottles consumed last month! My selection was a bottle of the Kevin White Winery Syrah, En Hommage.

Find the unassuming winery in the “Artisan Hill District” of Woodinville Wine Country. About a 40 minute drive from Seattle, this industrial area consists of numerous warehouses, many transformed into wineries and tasting rooms.

In normal times Kevin sets out to ensure that if someone visits the winery, they’re darn well going to learn something! He identifies vineyards and wine regions on maps that line the otherwise unadorned walls. Discussion ensues over the contents of concrete fermenters. Guests are invited back to the barrel room to discover what is destined for bottle. The ideal time to visit is during crush, typically September to October, when grapes arrive from vineyards. Visitors may investigate whatever bubbling concoction is busy transforming itself from grapes to the most delectable adult beverage. Or perhaps a chance to stir the lees (dead yeast cells) in a barrel of wine will present itself. 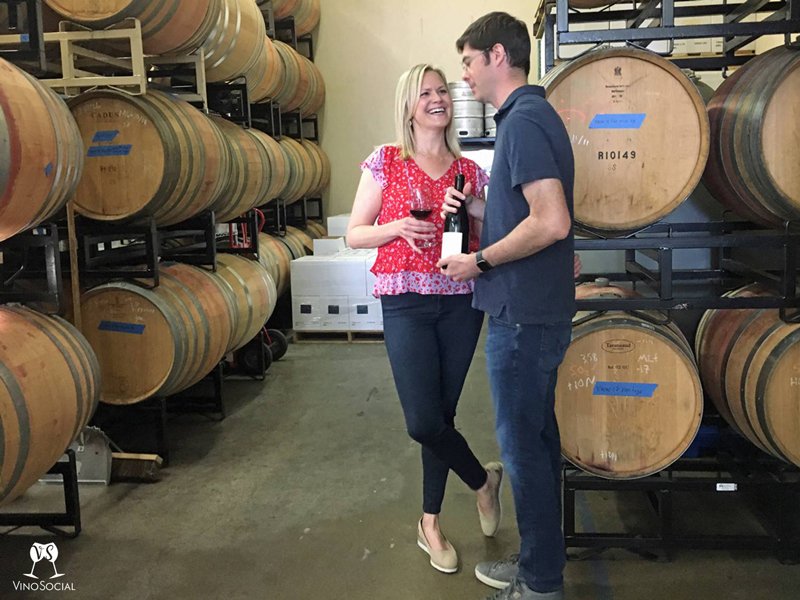 Kevin runs the winery in partnership with his wife, Stefanie. He is also the winemaker, father to twin boys, and an employee at Microsoft. In fact, it was Microsoft that brought Kevin to the Pacific Northwest. Then, on a date with Stefanie over a bottle of Yakima Valley wine, his journey took a turn leading him to become a vintner.

The first vintage of En Hommage, from 2010, was released in 2012. Wine lovers went berserk, the wine swiftly sold out, and the media showered the winery with accolades. That’s saying a lot considering that the 2010 vintage was a cooler growing season and generally not favored by critics.

At the start of Kevin’s wine journey, there were several people who provided support and encouragement. En Hommage Syrah is a tribute to those people: Hugh and Kathy Shiels of DuBrul Vineyard and Côte Bonneville, Leroy Radford of Flying Dreams Winery, Chris Sparkman of Sparkman Cellars, and Jon Meuret of Maison Bleue Winery. Additionally, he says he would not have been able to start his incredible adventure in wine if not for the support of Les Baer and Baer Winery.

For January’s Syrah Challenge, I chose to indulge with a bottle of the 2017 vintage of En Hommage. This beguiling Syrah is sourced from Boushey and Olsen Vineyards. Both sites are in the Yakima Valley at higher elevations and benefit from long, sunny days and cool evenings. These conditions help the grapes retain acidity resulting in the food friendly wine that the winery has become known for.

A sip of this wine offers comfort and spice in a time that is rather worrisome and lackluster. The delectable liquid’s vibrant zing makes a charming companion for a slightly piquant pasta puttanesca.

While the 2017 vintage is no longer available at the winery, the 2018 is available for $32 a bottle. Don’t worry, quality is consistent here. Besides, you’d be hard pressed to find a superior Washington Syrah at a lower price.

However, if you’re looking for an unbelievably phenomenal deal Kevin does release a Syrah/Grenache/Mourvedre blend simply called ‘Blue Label’ for a mere $20 a bottle. The wine sells out within a week, so be sure to join the Wine Club to get access. The wine is composed of what remains after Kevin assembles his other blends. In other words, it’s the same delicious juice. Think of it as a tribute to the everyday Cotes du Rhone blends that are perfect to enjoy any night of the week.

If you’re looking for excellent wines at a reasonable price, be sure to give the outstanding wines of Kevin White Winery a try.